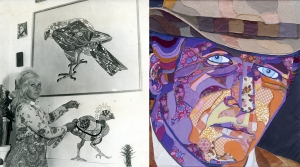 Ponckle married photographer Trevor Clark in 1964 and had two sons, Gavin and Jake. They all moved to Mallorca in 1969, where Trevor became a travel photographer. Ponckle was his stylist and in her spare time she began making pictures of bullfighters and flamenco dancers out of pieces of driftwood covered in fabric. These soon progressed to large fabric collages, first of exotic birds and then large-scale portraits of film stars of the day such as Paul Newman and Sophia Loren. These were shown at an exhibition at the Courtauld Institute in London in 1974.

Mallorca’s tourist boom was just beginning and the island began filling up with British visitors, including the eccentric Lady Docker, whose son opened a members club in Palma Nova, where Ponckle and her husband spent much of their time. This was the gin-and-tonic fuelled heyday of the expat scene, where George Best propped up the bar, long-haired men in flared white suits fell into swimming pools and lobster lunches lasted seven hours. Ponckle flourished and managed to maintain a steady painting regime, though the excess and glamour that surrounded her soon began to take its toll on family life. She returned to England in 1977 with her two sons and divorced Trevor.

One thought on “Mallorca”